Why a career in wind energy could be a smart move?

You are here:
Renewable energy 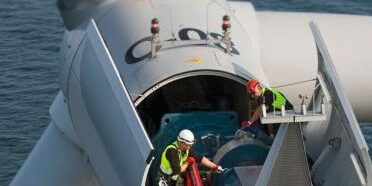 It’s hard to avoid the constant good news stories in wind energy. This week we look at why a career in wind energy could be a smart move.

Wind energy is one of the fastest growing job sectors in the USA. Wind energy output recently surpassed coal in the USA and the jobs market is booming. Renewables jobs also come with high wages. Virtually all wind farms and turbine operators are GWO members and we see first hand from demand for our GWO training courses that the sector is growing fast. Creating stable and high-wage employment for blue-collar workers in some of the country’s most fossil fuel-heavy states, just as the coal industry is poised for another downturn.

Simple economics are are driving both sides of this equation:

Building new sources of renewable energy is cheaper than running existing coal plants and prices get cheaper every year. By 2025, virtually every existing coal plant in the US will cost more to operate and run than building replacement wind and solar within 35 miles of each plant.

On the demand side states are pushing hard to set 100% clean energy goals, creating new demand for workers to build wind turbines and other renewable sources. Planning for the inevitable shift from coal-to-clean is creating economic opportunities in every corner of the country – and some forward-thinking policymakers are already heeding this lesson.

But the best aspect of renewable energy job growth is that it doesn’t matter how states voted in the last election. The American Wind Energy Association identifies wind farms and manufacturing facilities in all 50 states and 69% of congressional districts (78% of GOP districts, 62% of Democratic districts) paying more than $1 billion in state/local taxes and landowner leases, and supporting 24,000 manufacturing or supply chain jobs across 42 states.

Fundamentally the future is certain. At least certain in the fact that fossil fuels will run out over time and will become increasingly expensive as we head towards that point. The simple economics are already pushing in favour of renewables and the reality is that this will be the key driver of growth. Texas is a great example of this, the quintessential oil state is now a leader in wind energy. Regardless of political views money talks and the Texans are a smart bunch they go where the profits are.

So who are we to argue, of course we have a vested interest but all things considered a career in wind energy is a smart move.

STL USA are currently recruiting for new Course Instructors, click the link below to view the job spec.

Sign-up for the newsletter
Recent Posts
Go to Top
Get the latest course dates, offers and news straight in your inbox.